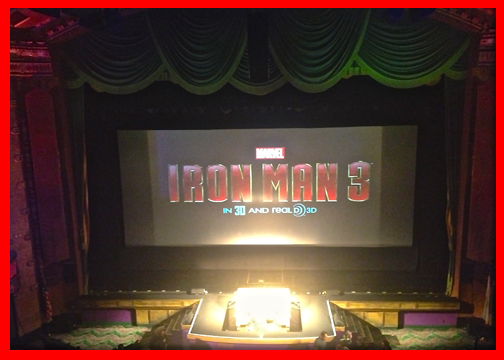 Ah! The magic of movies. And what magic it is, when created by the imagineer himself!

A masonic temple renovated to a live theatre renovated to a cinema hall, watching a movie at Walt Disney’s El Capitan was like praying at the altar of film. The live orchestra played famous film tunes such as the Star War’s theme song. And like any symbolic religious structure, the devout defined it’s spirits. And oh, how they defined it! They arrived in Iron Man gear, braving lines with crazy enthusiasm. They knew every comic book in which Iron Man existed. They screamed for signed memorabilia and hooted and whistled and applauded practically everything connected to their comic god. There were people who marathon watched the movie four times, back to back. Yes. That’s the virtually the whole day. Yes. That’s devotion.

By the time Shane Black, the film’s co-writer and director, introduced the movie, the anticipation was palpable.

When the previews started, the anticipation was as it’s peak.

It was a premiere to behold. An experience probably never to be replicated.

If you like movies. I hope you get to watch a premiere here once because only at such places can you truly marvel at how stories drive our dreams and shape our societies. Only here can you feel their magic unleashed to their full capacity. ❤

P.S. Stay till the end of the credits of Iron Man 3. You won’t be disappointed ;P